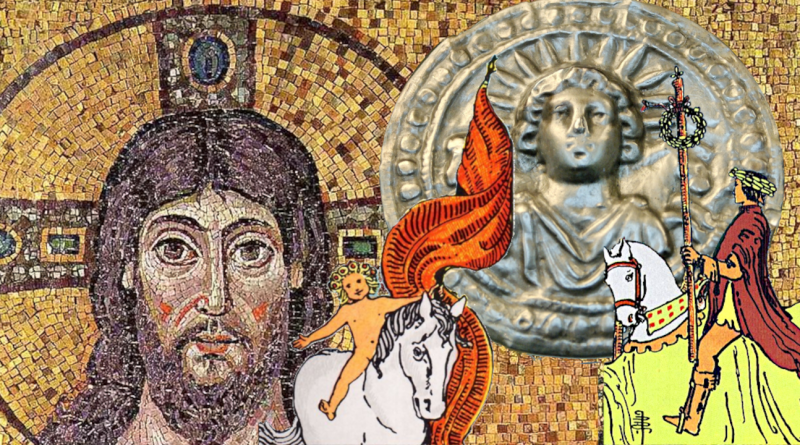 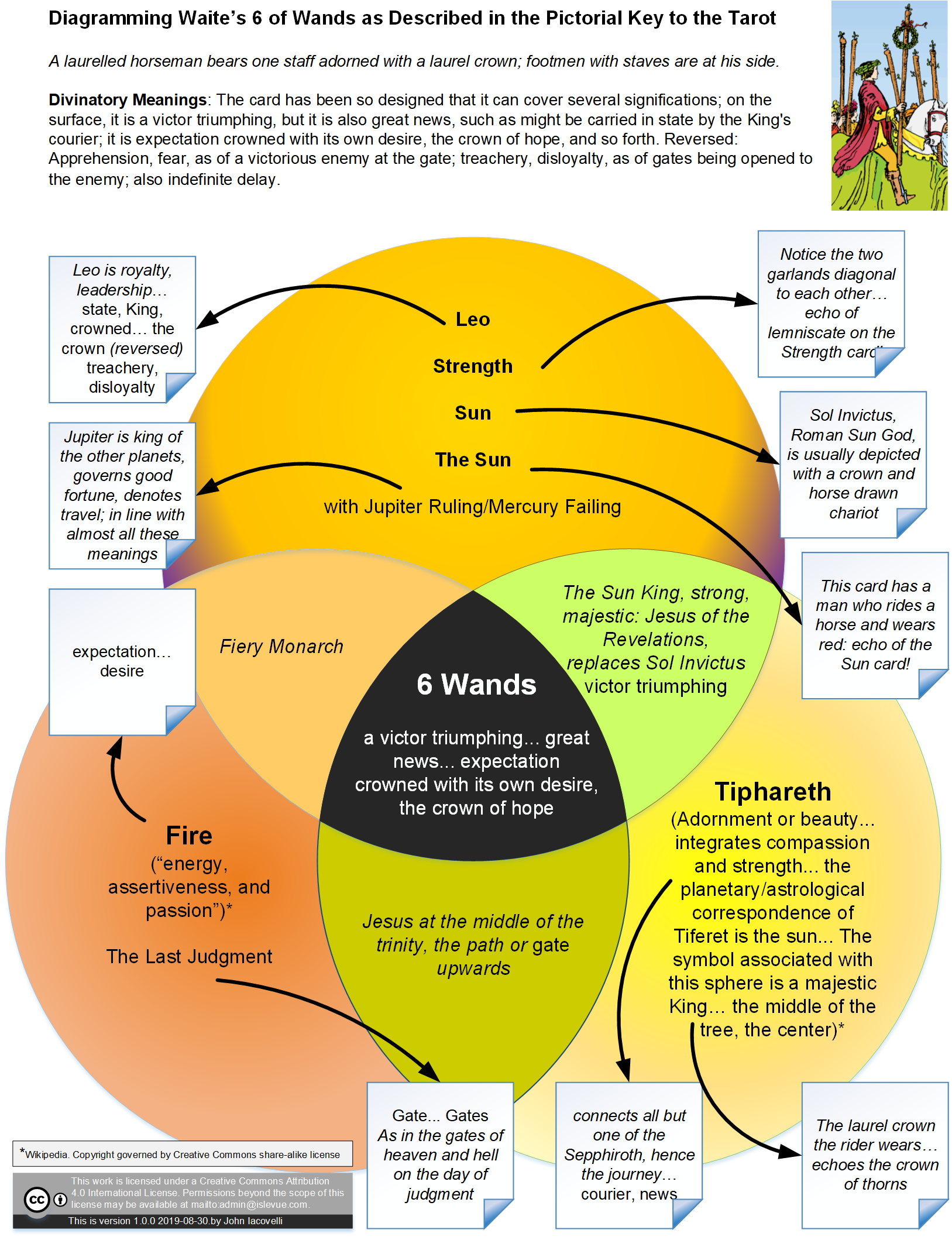 The Six of Wands appears to me to be a card in which A.E. Waite sent the divinatory meanings off on a tangent. Or off a cliff if you prefer to look at it that way. Mind you, I think he had a reasonable departure point for the tangent. It’s where he ended up about which I have my doubts.

As usual, these introductory posts convey additional analysis, as well as a link to the PDF version at bottom, which is better to print from. This is number ten in the series.

Let’s start with the Golden Dawn. The divergence between the GD’s and Waite’s divinatory meanings is a bit wider than usual for this card. The GD named the Six of Wands “The Lord of Victory.” Their meanings center on an expenditure of effort that leads to success within a social framework in a dignified manner. That would be in line with the astrological influences, both strong and powerful (Jupiter in Leo) and the influence of Tiphareth, which they defined as “Gain.” In fact, if we look solely at the illustration, and not at the written Divinatory Meanings, the RWS card is reasonably close to GD’s “Lord of Victory.”

Upon reconsideration of Jupiter in Leo, we might recognize a pattern: the king of the gods, the king of planets, and the king of beasts. Tiphareth also has “kingly” connotations. We don’t see a king, however, in Waite and Colman Smith’s illustration. Waite, though, goes out of his way to specifically tell us the man on horseback might be the king’s courier. This seems reasonable: after all, we already have four cards dedicated to kings; some of the majors could also be said to be kingly. Why make a “six” a king?.

Where Waite drives the Six of Wands over a cliff is the point at which he turns it into sublimal proselytizing for Christian mysticism. Waite adds one more king, namely, “The King of Kings,” Christus Invictus, to the mix. And the message his courier carries is the Gospel.

Wait. What? This may actually take less explaining than might appear. First though, we have to acknowledge the work of Marcus Katz and Tali Goodwin. They recognized the RWS Sun card as having more to do with Christ and the Book of Revelations than with Helios, the Sun god of ancient Egypt, the original Sun King. In Vol II Issue 7 Spring 2016 of the Tarosophist Magazine, Katz and Goodwin found a figurative link between the child on horseback of the RWS Sun card and Revelations, 19:11-16, which says:

[11] Now I saw heaven opened, and behold, a white horse. And He who sat on him was called Faithful and True, and in righteousness He judges and makes war.[12] His eyes were like a flame of fire, and on His head were many crowns. He had[a] a name written that no one knew except Himself.[13] He was clothed with a robe dipped in blood, and His name is called The Word of God. 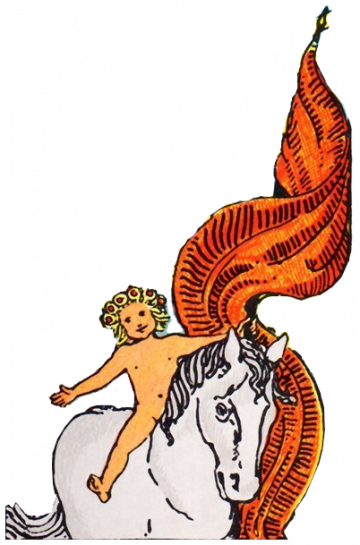 They then noted that “the sweet innocent child on the Sun card is the righteous Christ bearing a flag dripping with the blood of his enemies.” The same color as the cloak of the man on horseback of the Six of Wands. Recall also that there are very few horses in RWS; only the Knights, Death and the Sun have them. In fact, not even the Charioteer has horses! So being on horseback implies a great status. Recall also that the GD put the Kings on horseback, not the princes. Waite put the Knights/Princes on their mounts.

So the chief hint that he is meant to evoke Jesus is this echo of the Sun card. There’s another piece of evidence, which we’ll get to later. First, we need to describe Sol Invictus. It is no coincidence that Waite puts Jesus on the Sun card. Sol Invictus (“Unconquered Sun”) was a late Sun Worship cult at the time of Constantine. Remember that the Christianity vs. Paganism conflict was still very much in play at that time, and that Constantine is said to have been baptized only upon his deathbed. The Christians glommed onto Sol Invictus and switched Sol for Jesus. It was such a common misconception thereafter that even today, some art historians mistake depictions of Sol Invictus for Christ Invictus. By the way… the reason we celebrate Christmas on December 25th is because that was the day the Romans celebrated Sol Invictus’ day. And the halo we usually see around the head of Jesus in depictions? It’s an echo of the solar halo of Sol Invictus. 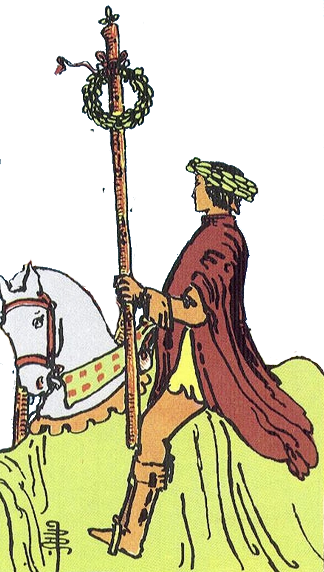 But our rider doesn’t have a halo… or does he? He has a laurel crown (an echo of Apollo, by the way, hence another connection with the Sun). The laurel crown is the same shape, and even evocative of the crown of thorns. Notice the garland on top of the wand he holds. What is it doing there? Recall the lemniscate (infinity sign) of the Strength card. It’s tilted at an angle as she bends her head. Look back at the Six of Wands. They aren’t connected, but the garland on the rider’s head and the garland on the wand can be connected visually to make a lemniscate. More importantly, Waite, in his description of the Magician, who also has a lemniscate, called that symbol “the mysterious sign of the Holy Spirit, the sign of life, like an endless cord, forming the figure 8 in a horizontal position.”

The Holy Spirit completes the link to some of Waite’s “adjustments” of the divinatory meanings for this card. It is the Holy Spirit, per John 14:26, “whom the Father will send in my name, will teach you all things.” This is the “great news.” The word “gospel” comes from the Greek noun euangelion, for “good news.” The verb euangelizo also means “to bring or announce good news.” Both words derive from the noun angelos, “messenger.” i would also suggest that the references to “gates” in the reversed meanings have to do with the gates of heaven.

Thus, more than just the “Lord of Victory,” Waite turns his Six of Wands into a sermon. For modern tarot readers, it’s not an inconvenience, for everybody likes “good news,” and this is above all, a very positive card. For me at least, this changes the way I see the card. It’s not just an announcement of forthcoming victory, success, or reversed, a warning about an enemy anymore. Now I see it as more about a victory of the spirit. 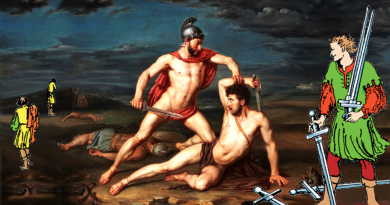