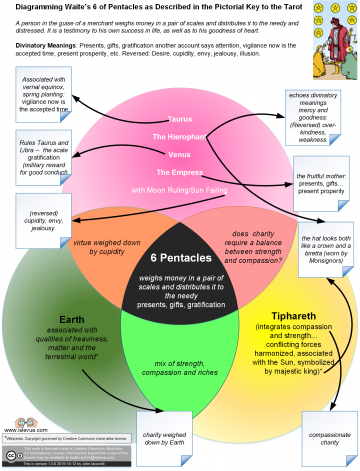 The Six of Pentacles is a card we may have problems with in this day and age. I know I have. When I see Coleman Smith’s illustration, I immediately interpret it as the rich man weighing the worthiness of the beggars before giving them charity. The implication therefore is that he turns away those beggars he does not find suitable. Granted, in the cultural context of Edwardian England, Waite (and Coleman Smith) might not have seen that as a bad thing. Waite, however, states the rich man weighs the money. He does not say the rich man weighs the appeal for help. But there would have been no need to weigh the coins. Silver coins were the mainstay of the late Roman economy, but even in the early middle ages, copper coinage was widespread. So what’s going on, and what does it have to do with Taurus? Why are there scales in the first place, for that matter?

As usual, these introductory posts convey additional analysis, as well as a link to the PDF version below, which is better to print from than the bitmap above. This is number nineteen in the series. The series traces the influences shown in the Zodiac Tarot Wheel, pictured below, to the divinatory meanings and storyboards of the minor arcana cards numbered 2 through 10 of the RWS deck.

As we might guess by the fact that it comes down to us from Sumer, Taurus is one of the earliest known signs of the Zodiac. Some say it was the very first, in fact. It dates so far back that it occurred at a different time than it does now. It was originally associated with the Vernal equinox. This timing also associates it with planting; as in the bull or ox that helped plow the fields. Taurus represents the beginning of the life cycle in the agrarian age.

Taurus was also known as the Bull of Heaven. The goddess Ishtar sent him to kill Gilgamesh because Gilgamesh spurned her advances. The Sumerians tended to mix love and war, even in their goddesses. Ishtar, the Queen of Heaven, was not only the goddess of sexual love and fertility, but also, of warfare, combat, justice and political power. We can see why Venus and the Empress are associated with Ishtar, insofar as the first two qualities apply. The Greeks re-apportioned the rest, and added a pure spiritual concept of love. The Greeks’ Aphrodite (Roman: Venus) was the goddess of the higher (spiritual) and lower (bodily) forms of love. Venus, therefore, is an echo of Ishtar, if not exactly one and the same.

The Sumers also associated Ishtar with the planet Venus. Venus ruled Taurus, in the Zodiac. Venus also ruled another sign: Libra. Libra was the other pole of the agrarian cycle: the Autumnal equinox. This is why Venus is sometimes represented alongside both the bull and scales. One of Ishtar’s central myths, much like the later Greek myth of Persephone, has Ishtar descend to the underworld (where she remains for three days), then later presides over the agrarian cycle after being rescued. That one of the strengths of tarot is its strong storytelling ability may have something to do with a foundation in mankind’s oldest and most important myths and stories.

Let us return to the scales. We therefore have not only a sign of balance (the scale), but we also have pairs of balances: Vernal and Autumnal equinoxes, love and war, sexual love and higher love. The schema of balances is reinforced by Tiphareth, the qabalistic influence, which is said to to be the harmonizing force, a balance between the conflicting forces of compassion and strength.

All these factors explain the purpose of the scales in the Six of Pentacles. This analysis changes my understanding of the card. I will now look upon the illustration as a sort of homily to the effect of “charity is a virtue of the rich, for only they can be strong (and rich) enough to balance strength with compassion.” As a homily, I think it is utterly wrong; a load of Taurus-sh*t. It has always been my experience that those with the least share the most. But I think it is a homily that Waite (and possibly Coleman Smith) would have understood in their time. 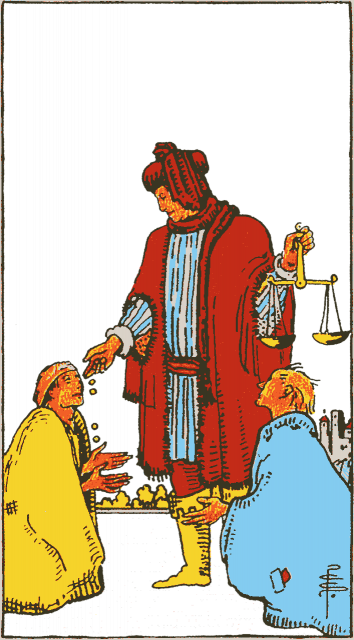 I used the word “homily” on purpose, because we have another question that faces us. In fact, it’s the same question we posed in the Two of Pentacles: what’s with the hat? As a graphics artist thrown in with many theatre people, Coleman Smith certainly knew the importance of each detail of the costume. If we take away the scarf, the merchant’s hat looks like a biretta with a tuft on top. It is the hat worn by the Monsignor. Monsignor was essentially an honorific title given as an award to bishops, prelates and canons; it recently has been restricted to Vatican diplomats. We must recall at this point that the Pope is the Bishop of Rome. Here’s our Hierophant!

Waite took great pains to distinguish the realms of the High Priestess and the Hierophant. The latter’s authority is “manifested” in this world. Waite states that he is not the prince of the “occult doctrine.” He is the leader of “the world of institution.” When we look at the divinatory meanings that Waite assigned the Hierophant, we find among them “overkindness” (albeit a reversed meaning). Perhaps in light of this worldliness, Waite would feel a need to weigh the worthiness of the beggar. We must also take into account that to the Golden Dawn group, this card was primarily a sign of material success: “Success and gain in material undertakings, power, influence, rank, nobility, rule over the people. Fortunate, successful, just and liberal.” Waite does seem to have amplified the very last part.

It could also be said that Earth, the elemental force, may be a “heaviness” factor that weighs down the virtue of charity.

In conclusion, the RWS Six of Pentacles seems to hide its strength (the generosity of the Earth and agriculture) and emphasize its weaknesses (the niggardliness of the scales and the act of weighing). To be fair, it may have been a difficult task to illustrate. Or it may be that Waite felt he could only depart so far from the GD’s divinatory meanings (though we’ve seen enough variances to doubt that). Perhaps by the time we finish the one page guides for all the Pentacles we may come to a further conclusion regarding this card. 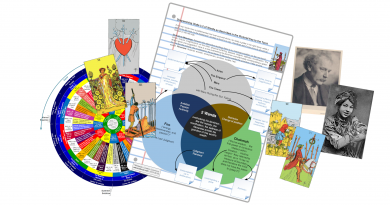 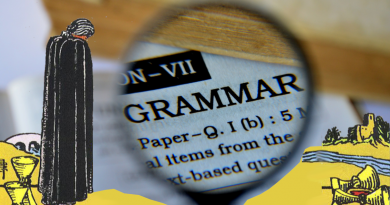 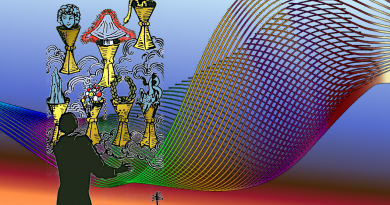