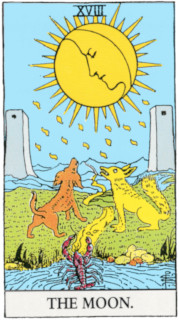 We return to our series of posts regarding the symbols in the Waite Colman Smith tarot deck. We compare Waite’s descriptions in the Pictorial Key, the textual descriptions by predecessors and contemporaries such as the Boot T and Mathers, as well as any “undocumented” symbolism in the illustrations, which may represent enhancements to Waite’s instructions by Colman Smith, or the latter’s own ideas.

Let’s first look at the meaning of “reflected” light. Waite called it an intellectual light. Indeed, reflection is a means of understanding ourselves. The specific understanding that Waite deems important is the illumination of our animal natures, of which we have domestic and wild parts. We note that Waite also points our attention to the crab, which seems unusual since the Moon is Pisces, and the crab is Cancer. So it’s there for a reason. Waite notes that “as a rule it sinks back whence it came.” So is the situation hopeless? Will our wild side always “sink” us back into the mire?

We must return to the symbols of the wolf and dog, the domestic vs. the wild. We have already noted the wolf’s color-affinity with the moon. We note also that the dog barks and the wolf howls at the Moon. They cannot communicate directly with each other—they speak different “languages.” At the moment depicted in the illustration, the wolf appears to be looking at the dog, as if they take turns barking/howling at the Moon. Given the dog as the domestic side, and the wolf as the wild side, this underlines the use of intellect to shine light on the wild side of our dual nature. We may never understand it, since it is unknown, but we can at least acknowledge that it exists, to better understand our overall nature. That this may also be about conquering the wild side may also be a factor… after all, Waite, as we have noted, has the sensibility of a Victorian.

So where does femininity come in? After all, the Moon is often thought of as feminine (e.g., Diana), and the Moon figures prominently in the High Priestess card, underlining the nature of her spiritual mysteries. Mathers says that the Moon “symbolises Twilight, Deception, and Error.” Waite, however, also noted that “the Moon, who is Isis, shews drops of rain or dew in the act of being shed by the luminary and these-as we have seen-are the tears of Isis, which swelled the waters of the Nile and fertilized the fields of Egypt.” Waite is much more positive than Mathers. That also makes the link back to the feminine, as per the note regarding the High Priestess.

For the modern reader, it is usually the “deception” side of the Moon’s meaning that is given. Often, it’s a suggestion that one has to look again, preferably with better light; to recognize something that isn’t what it appears to be as it really is. To look beyond the mystery.

But Waite, we already have said, is more positive. I would add “reflection” to the standard “deception” meaning. This illustration is clearly a suggestion that a struggle is taking place between the domestic and the wild. For a querent asking about a matter of love for example, especially where commitment and honesty are involved, I would point to the dog and wolf. The dog is loyal, but the wolf is wild. We noted the waxing Moon favors the wolf’s side of the card. Reversed therefore, might favor the loyal dog. But even so the primary message is that intellect and reflection shines light on and reveals the part hidden behind the mystery. So the reader might do well to ask the querent to use their intellect to answer the question as to whether the object of their affection’s domestic or wild side rules them. In doing so, the card helps them find the answer to question inside themself. 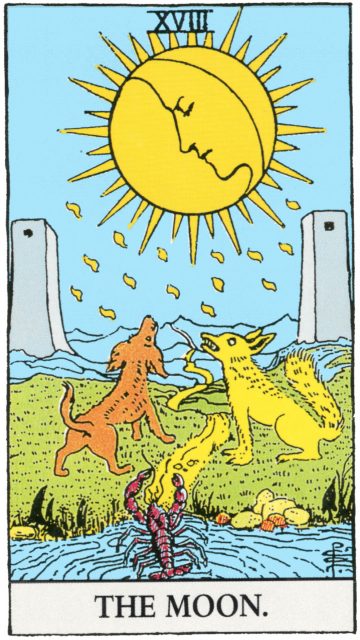 Final note: some of the points in this discussion were originally written for a series of posts in at the Cartomancy online forum,