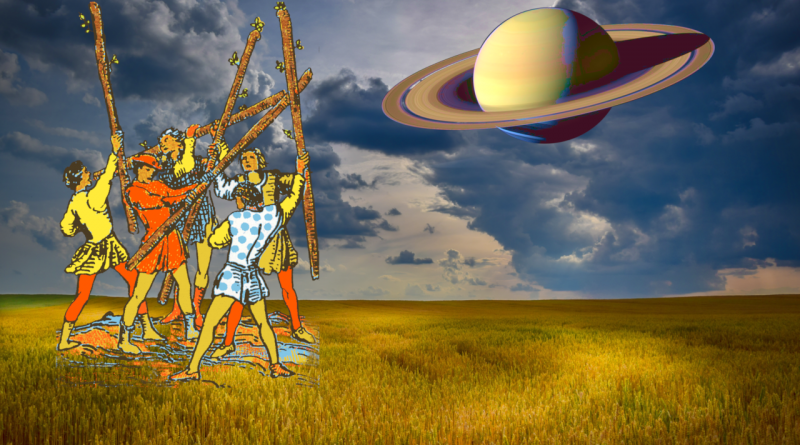 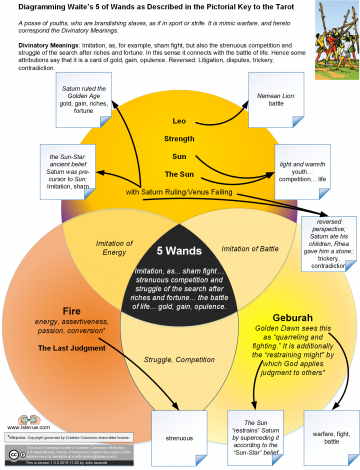 The Five of Wands is a depiction of youthful competition and the battle of life. Its decan is at the intersection of Saturn, the Sun, and Geburah, which the Golden Dawn defined as the sephirot of “quarreling and fighting.” Waite’s divinatory meanings have a major difference in tone, but not of substance, versus the Golden Dawn’s.

The subject for both is strife and fighting. But whereas the GD gets real, as in “violent strife and contest, boldness, rashness, cruelty, violence,” Waite’s meanings are “imitation,” and “sham.” Though Waite states it is “strenuous,” it is just a “sham fight.” Clearly, they both start from Geburah, but then go their separate ways. One could possibly say that the “restraining might” of Geburah, by which God applies judgment to others (see the Wikipedia article linked previously) might account for Waite’s “weakening” of the fighting aspect, but that would be unsatisfactory: God is not “sham fighting,” and Geburah is “restraining,” not “restrained.”

Saturn usurped power from his father and ate several of his own children (from which some infer human sacrifice was part of his worship). But apart from receiving gladatorial offerings in Roman culture, he had little to do with strife and fighting. He was an agricultural deity who presided over the Golden Age.

“Gold,” however, is what he has in common with the Sun, our planetary influence under Leo. Saturn and the Sun in combination are the explanation for the difference in tone. So what does the distant, frozen mega-planet have in common with the yellow-gold star at the center of our existence? Let us see.

Children of a Lesser Sun

There was a belief going back to Mesopotamia that the planet Saturn was a pre-cursor of the Sun. A number of Babylonian and Chaldean texts are said to have confused the two, though Saturn was more often referred to as “the Star of the Sun.” Diodorus Siculus, in the first century B.C.E. documented this belief (available from Google Play Books; see Book II, The History of Diodorus Siculus). Of other classical writers, Hyginus appeared to have some confusion, listing Saturn as “Sol,” (sorry, can’t find the exact reference) and Nonnus, in the Dionysiaca called Saturn “the time traveller” and compared it to the Sun. That this was a topic of discussion in Waite’s times is witnessed by a 1908 footnote in the Proceedings of the American Philosophical Society. Note, however, the theory of Saturn as “Sun-Star” is not the same theory as one popularized in the 1970’s based upon the work of Immanuel Velikovsky.

Saturn the Sun-Star may be a fragment of the story of the Golden Age. This is the essence of tarot: stories, myths and astrological profiles that describe the human psyche even today. It is the story of Saturn, the grandfather god who may have required child sacrifice, who presided over a (literally) darker planet, though the Earth provided such abundance that work was unnecessary. Our society has darkened considerably in recent years, and some call this the second gilded age; perhaps we should call the gilt at the top of our society Saturnian. 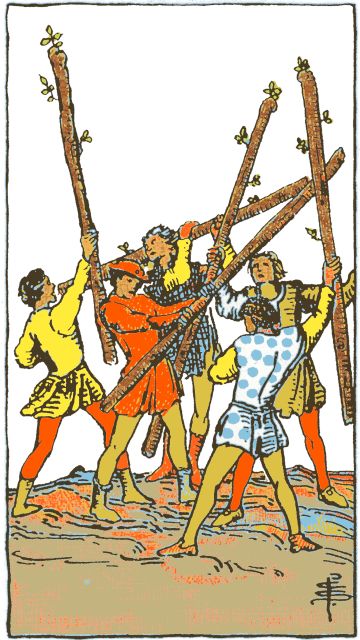 It is tempting to say that Waite’s mystical Christianity is attempting a play on words with Sun and son of God, branding older gods such as Saturn as “imitation.” After all there is a cross in the illustration (even a man carrying it on his shoulder) if you look closely, at the center. But there isn’t any hint of that in Waite’s divinatory meanings.

We do in fact see “gold” and “gain” among Waite’s divinatory meanings. So we have two references to Saturn and the Golden Age, the first hidden, and the second, obvious. Therefore I think it reasonable to say that we have found a plausible explanation as to why Waite transformed the Five of Wands into a story of “sham” fighting. It is Saturn vs. the Sun, a past “imitation,” lesser Sun and today’s real, greater Sun.

Finally, I note Waite’s reversed divinatory meanings. Venus is the planetary ruler of the decan opposite this. Recall that Saturn’s wife Rhea hid the baby Zeus and gave Saturn a rock instead when he was to be eaten. “Trickery” and “contradiction” could possibly stem from this reference: the story of Saturn from Venus and Rhea’s perspective. One origin story states Venus was born as a result of Saturn’s actions: she rose from the sea foam created by Saturn’s father’s penis, cut off by Saturn and cast into the ocean.

As always, we ask what about this analysis helps us read the card better? I think most readers today wholly or mostly accept Waite’s meaning, i.e. that it is about the “battle of life” and “the strenuous competition and struggle of the search after riches and fortune,” as Waite described it, There is certainly no reason to modify that. We have hopefully thrown light upon the RWS Five of Wands, but found nothing that challenges its accepted meanings in any way. 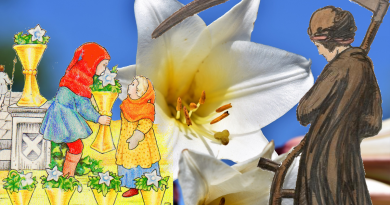