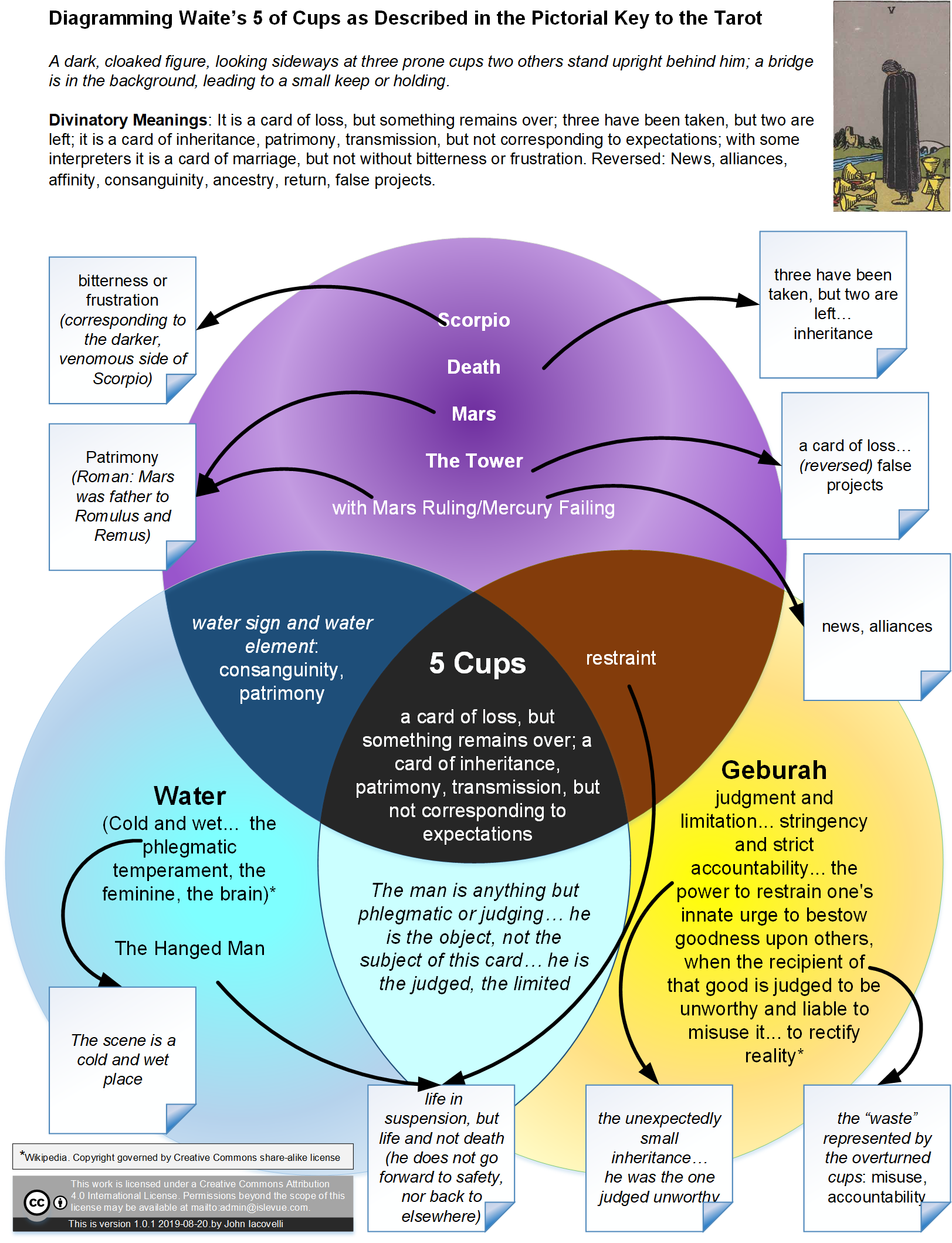 The Five of Cups is the first case of a card that adjoins another previously diagrammed card. It shares nearly all the same astrological and elemental influences as its decan neighbor, the Six of Cups. Only the qabalistic influence and exalted/failed planets are different. This provides an opportunity to see their effects upon the divinatory meanings in relative isolation.

There is also an interesting “qualitative” difference in the divinatory meanings for the Six of Cups, versus most of the other cards analyzed so far. We’ll save that for the second section of this post. First let’s look at the influences, because influences are the central focus, and hopefully, the most important lessons of these one page guides.

Recall that Levi assigned the nodes of the sephiroth to the minors. The Golden Dawn picked up these assignments, gave them additional context, and also described the numerology behind them as a progression (to over-simplify, from ace equals root to ten equals completion/the turn to a new cycle). Geburah gave the Fives a context of “opposition, strife and struggle; war, obstacle to the thing in hand. Ultimate success or failure is otherwise shown.” For the Sixes Tiphareth provided a context of “definite accomplishment, and carrying out of a matter.”

Geburah is said to be about judgment and limitation. Colman Smith appears to have illustrated this by making the figure of the Five of Cups the one who had been judged to be limited, or unworthy. In fact, if we recall the word “shown” from the GD text, which is in past tense, we can see that Colman Smith takes it as a cue to set the scene as an “aftermath.” Meanwhile, Waite described an event of small inheritance or patrimony.

Tiphareth, for the Six of Cups, is said to be compassion and strength, providing the harmony necessary for creation. We can see that manifested in the “feel good” nature of the scene as well as in the general association of childhood with creation.

Thus far, we’ve concentrated on the qabalistic difference. To further explore our theory that the shared influences should produce similarities between the two cards, we now look at the similarities. We will also note the lesser astrological difference, the difference in exalted and failed planets for each decan.

I therefore conclude through the analysis of similarities and differences between two decan “neighbors” provides further evidence that the exercise of tracing the astrological/elemental/qabalistic influences to Waite’s divinatory meanings and Colman Smith’s illustrations is effective in explaining the minor arcana cards of the RWS deck.

The Grammar of Divinatory Meanings

There is another difference, of type, in the Five of Cups versus most of the other cards analyzed so far. I didn’t see it until I had completed the entire Venn diagram. This difference made my first efforts of tracing the influences and meanings quite difficult. This difference is that the person depicted in the illustration is the object of the meaning instead of the subject. He is not an actor “acting out” a divinatory meaning, as we have seen thus far in Colman Smith’s illustrations. He is “acted upon” by the divinatory meaning. He is the image of one affected by it, not the one effecting it. We should explain further.

Most everyone knows that sentences have a subject, predicate and usually, an object. Consider a sentence. “The cow jumped over the moon.” The cow is the subject, for “the cow” is who or what the sentence is about. “Jumped over the moon” is the predicate; it is the verb and all that follows the subject. “The moon” is the object. It is acted upon by the verb, it is “jumped over.”

To review the previous one page guides. In the Two of Wands, the man on the ramparts is the subject. He looks over the sea and shore. In this way he acts upon… that is, he acts out… the divinatory meaning of Dominion. In the Ten of Pentacles, the various people in the illustration are the subjects. By doing what people of their ages normally do, they act out the deeper divinatory meaning of the cycle of life. In the Nine of Swords, the wakened dreamer is the subject. She acts out one moment in the divinatory meanings of internal desolation and innate remorse. In the Six of Cups, the children are the subjects. One giving the other the lilly flower acts out, again, the deeper divinatory meaning of renewal and rebirth. The Eight of Wands is “unusual,” for having no people, as we said, so we’ll skip that one… Thus far, we could be reminded of actors in silent movies, who in the first scene before the camera pantomime their characters’ innate qualities so that the audience understands who and what they are. The “characters” in these cards, so far, “do” the meanings. They don’t just represent them, they are the meanings.

In the Five of Cups we find a figure standing by the river sulking. The divinatory meaning is loss, of an inheritance or transmission whose value is below that which was expected. If we go back to the Golden Dawn, their divinatory meaning was “loss in pleasure,” certainly in line with Waite’s interpretation of an unexpectedly small inheritance.

This figure doesn’t “lose” anything. The divinatory meaning is the subject—an undesired event involving inheritance—and he is the object, he whom the loss was done to. The meaning is an event. A figure can’t embody an event, and thus, the character we see is the person to whom the event happened. His function in the illustration is similar to the object in a sentence. He is “the moon” in “the cow jumped over the moon.”

We might conclude from this that Tarot has a grammar. It has subjects, such as a figure of authority who exercises dominion. It has verbs, such as “to move” as in the Eight of Wands, which “moved” swiftly. It has objects such as events. Consider a sentence such as “the little girl celebrated her fourth birthday.” An event can be an object of some subject’s action. This ties in with an almost universal belief that a layout of tarot cards tell a story. Rachel Pollack, in an article at tarotassociation.net (may be pay walled) relates that the Italian writer Italo Calvino had said “The tarot is a machine for constructing stories.” (This was in the afterword to The Castle of Crossed Destinies, 1969). One needs grammar to tell a story. This distinction between subject, object and verb/event may be a first sign that we will encounter similar parts of language as we continue through the minor arcana. We also know that the court cards and many of the major arcana will be “subjects” in much the same way that the man in the Two of Wands is a subject.

We shall see if this leads anywhere.

The Ace of Cups portrays, in fact, a city, with many towers and spires and minarets and domes rising above the walls. And also palm fronds, pheasants’ wings, fins of blue moonfish which certainly jut from the city’s gardens, aviaries, aquariums, among which we can imagine the two urchins, chasing each other and vanishing. And this city seems balanced on top of a pyramid, which could also be the top of a great tree; in other words, it would be a city suspended on the highest branches like a bird’s nest, with hanging foundations like the aerial roots of certain plants. (This is not part of the Calvino quote referred to above, but it’s from the same book. And it’s not the RWS card, but the Tarot de Marseilles card. But we can still appreciate the quote and the graphic!) 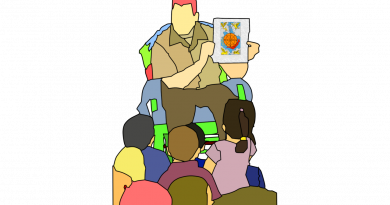 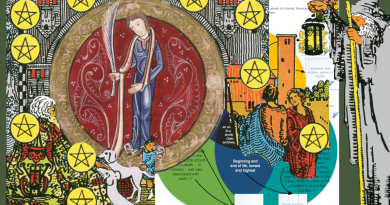