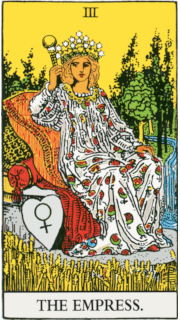 By way of introduction to this particular card: I was in a seminar with twenty other people the week before last. I was surprised when the seminar leader stated flat out that the Empress, in Colman Smith’s illustration, was pregnant. I was even more surprised when every woman in the room, spanning an age from under twenty to over seventy, wholeheartedly agreed. So, now I take it as given that The Empress is going to have a little Arch Duke or Arch Duchess. Had to look that title up, by the way!

And the fact that she is pregnant is probably all we need to know about the Empress to understand this card. But let’s look at what Waite said, anyway.

It would hardly be flip to state that Waite had some woman issues, but let’s not leave it at that. It is clear from all the above that Waite and Colman Smith are emphasizing the physical side of womanliness, particularly that of bearing children and of sexuality In this, it appears he is portraying her as an opposite of the High Priestess. This is not the focus of his contemporaries and predecessors. In particular, I point out Mathers, who states the Empress is the “symbol of action,” and the Emperor is the “realization.” Where Mathers gives us complementary pairs, Empress and Emperor, High Priestess and Hierophant, Waite and Colman Smith presents us with opposite pairs, High Priestess and Empress, Hierophant and Emperor. I believe it is Waite’s focus on Christian symbolism and a Christian interpretation of the Tarot that motivates this change in focus.