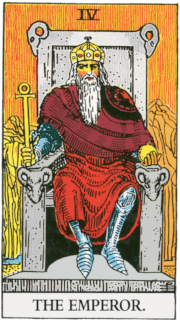 Whether Waite liked it or not, it seems to me that Colman Smith illustrated the emperor with a bit more virility than Waite may have been able to face up to. In any case, the Emperor, of whom the Book T personifies as “War, conquest, victory, strife, ambition,” and Mathers as “realization,” (which could be said to be a form of virility), in the Waite Colman Smith deck appears to convey a much more masculine message than its antecedents. As such, I feel that Waite took a strategic move with the High Priestess/Hierophant pair and the Emperor/Empress pair to stress each of the “couples'” complementary natures. We’ll go into a little further detail in the next post (the Empress). The stressing of the complementary natures seems to me, at least, to be a rational, organizing principle that “fills in” a lot of the blanks that the lack of detail of his predecessors’ descriptions of these archetypes had left unfilled.

Final note: notice the red striped background pattern of the card. There is no other card in the Waite Colman Smith deck like it. I don’t think it means anything. Though it is important to concentrate on many small symbols spread throughout, there is such a thing as getting stuck on the minutiae!