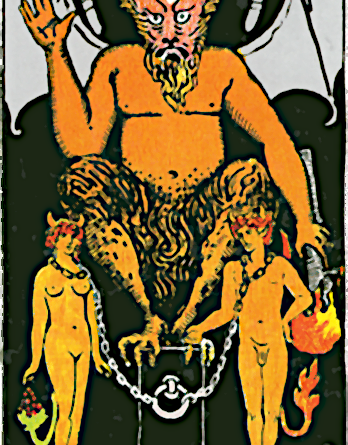 Let’s return to our series on the symbols of the RWS tarot deck as described by him in the Pictorial Key. We may jump around a bit, and take them out of order, again. This time we’ll not stop at differences and similarities with Waite’s predecessors and contemporaries. We will also try to bring the “story” up to date; to look at the meanings from a modern reader’s point of view; and hopefully, find some small facet of a new point of view to reading the Devil.

Waite goes on to tell us that the meaning of the card is “Ravage, violence, vehemence, extraordinary efforts, force, fatality; that which is predestined but is not for this reason evil.” This is a rather old-fashioned view of the Devil as a force that acts of its own volition, tempting and coercing the actions of man.

In a recent thread on deck comparisons over at the Cartomancy forum, a number of newer “Devils” were brought up, but one in particular may serve to illustrate a more modern view. The picture below is from the Tarot of Dreams (click to enlarge it, then press back to return to reading):

The Tarot of Dreams Devil is a very beautiful card, and the card seems to me to be quite different than others I’ve seen. Interestingly, the caged character is the same Fool character as on the Fool card in this deck.

But to get past the cheap comic remarks and make a point… (1) by putting a human, known character in the cage rather than little demon-ettes; (2) by putting him there alone, and (3) by making the devil himself much more human looking (rather than the Baphomet-with-bat-wings character), even echoing the fool’s hat somewhat, the message is that whatever the reason he’s chained for, it has a human cause rather than a supernatural one. Whether it be self-caused or caused by the loneliness of his solitary status, it’s clear there’s no one to blame but himself.

So the takeaway is that card shows punishment, self caused, but which can be terminated by yourself. A number of readers read “being bound or addicted” into the punishment, which is probably a fair thing to do, but I’m not sure it’s applicable in all cases.

So we have a reflexive card. The illustration turns back in upon the reader, like a reflexive pronoun. That certainly seems like a plausible element for the deck of Tarot of Dreams, since dreams are about ourselves. And it would also reveal a lot about the readers that use this deck: that they concentrate on the interior state of the querent insofar as finding answers. That might be a rather good approach.

I would imagine that if a querent came asking a question which seems wholly about them-self, this would be a great deck. Sort of a specialist deck for self centered millenials. But that might be too harsh.

Returning to a point made earlier. In olden times, when someone sinned, they might say “the devil made me do it.” But nowadays, of course, hell is empty and the devils are here… in ourselves, in some cases, or in the powerful positions of our society.