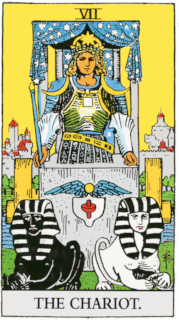 We return to our series of posts regarding the symbols in the Waite Colman Smith tarot deck. We compare Waite’s descriptions in the Pictorial Key, the textual descriptions by predecessors and contemporaries such as the Boot T and Mathers, as well as any “undocumented” symbolism in the illustrations, which may represent enhancements to Waite’s instructions by Colman Smith, or the latter’s own ideas.

We’ve thus noted that Waite seems to be spending quite a bit of energy on distinguishing the Chariot from the High Priestess. Why has he done this? My theory is that it’s a further step away from the kabbalah-leaning early interpretations of the Golden Dawn to the his Christian/Celtic re-interpretations.

I do want to note one more symbol, unmentioned by Waite. Mathers noted “On the square which forms the front of the Chariot we see the Indian lingam surmounted by the flying globe of the Egyptians.” This is actually the lingam and yoni. The lingam is the phallic looking part (Hindus would argue it is not phallic, but since we’re looking for the meanings inserted by westerners, we should regard it as phallic). The yoni is the female part. Together they symbolize the merging of macro and micro-cosmos, the masculine and feminine, creation and regeneration. As such, we may draw a further connection between the prince in his chariot and the High Priestess. Rather than the parallels that never meet that Waite would portray, they are complements in the same processes, touching at the edges.