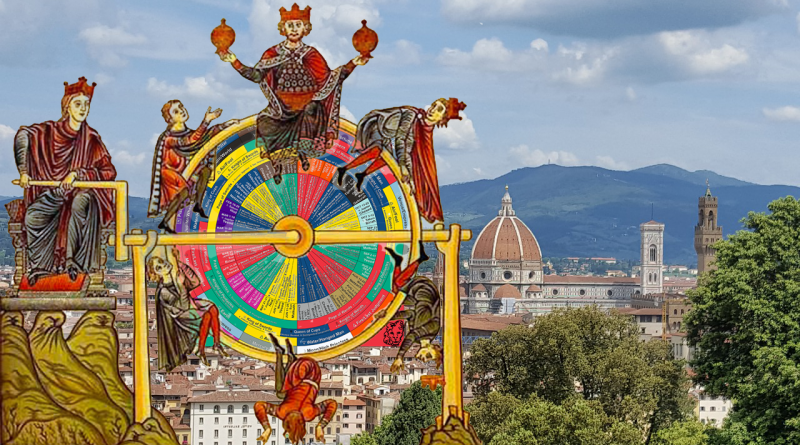 I detect a turn in the direction of rota fortunae in my personal life. I shall take that as a hint from Dame Fortune that it’s an auspicious time to update my personal take on the wheel.

As those familiar with version 1.0 of the wheel may recall, that version was focused on the Golden Dawn. Having analyzed Pamela Colman Smith’s illustrations for the minors in the manor described below, I’ve come to the conclusion that the wheel is appropriate for the RWS deck. A different spin, if you will. I have replaced the descriptions taken from the Book T with excerpts of the divinatory meanings from The Pictorial Key to the Tarot. I’ve kept the Golden Dawn’s esoteric names for the minors. They all line up with Waite-Smith perfectly, and are very useful, in my opinion.

The main reason for the update, actually, was to move the "source" document out of Microsoft® Visio™. It is now a scalable vector graphic (.svg). As such, free and open software such as InkScape can work equally well to edit the ‘source" document as proprietary software such as Adobe® Illustrator™. The Tarot Wheel carries the most liberal of the Creative Commons licenses (attribution type) expressly because I hope to see others pick it up and customize it. It would make a splendid platform as a "Little White Book" for a new deck. In addition to the finished wheel, I am making a completely "empty" one, i.e., no text, no colors, just shapes, available as well.

Note: the small picture of the tarot wheel leads to a bitmap image of it. It’s high enough resolution for most needs. For the scalable vector graphic, and for a bitmap image of a draft poster that I may have produced soon, the download links immediately follow. They require free registration, though you have to verify upon receipt of email. With the various DKIM and other security protocols implemented on the mail server, the verification email should go through; but if not, check your spam folder. Sorry for the inconvenience… it’s just a required security fact-of-life in an insecure WordPress world, unfortunately.

Virgin Tarot Wheel - IDs and Labels only - .svg in .zip

Tarot and the Wheel of Fortune have been joined at the hip since the beginning. They date back to the parades of Carnaval and Petrarch’s poem, Triumphs. As Dame Fortune weaves and unweaves her thread at unpredictable times, the wheel spins one way, then another. Our fates are carried up and down with it. More importantly for tarot, Dame Fortune’s wheel has long been recognized as a metaphor of the Zodiac. If tarot and wheel are tied together, then astrology is also tied to tarot.

In 18th century France, Court de Gébelin additionally tied tarot to the Hebrew system of numerology, qabala, He suggested guidelines for fortune telling. They were most prominently taken up by a French contemporary, Eteilla. Where de Gébelin’s divinatory methods chiefly stemmed from qabala and traditional (playing card) cartomancy, Eteilla explicitly added astrology. The divination engine of tarot therefore carries on the traditions used by astologers for many thousands of years.

Though Eteilla wrote various books, the "system" that we know today, the one "mapped" above, was popularized by late 19th/early 20th century tarot theorists. Consider the wheel’s structure this way. The four classical elements would fall into astrological places based on the fixed signs (the corners of the wheel above). They alternated the seven planets, though they had to repeat some. They alternated the elements with each change of zodiac sign. The numbers were already there, to be split into 36 spans of ten degrees, called decans. With this system, they could assign divinatory meanings which took each influence into account in a semi-formulaic manner.

In A.E. Waite’s The Pictorial Key to the Tarot, we find no mentions of astrological signs, nor of qabala. When even the word "fire" appears, it references only common fire. Yet Waite also wrote that he could not reveal all the secrets of tarot due to oaths which he had previously taken. Therefore, our question is, how can we determine whether the Waite Colman-Smith tarot follows this system?

We can test the idea by analyzing Pamela Colman Smith’s illustrations. It is said Waite delegated to her the lion’s share of work on the minor arcana. Colman Smith, like Waite, had been a member of the Order of the Golden Dawn. If we find that the themes in Colman Smith’s illustrations for the numerals two through ten of the suits line up exactly, or almost exactly with the descriptions we find in the Golden Dawn’s Book T, we should be safe in assuming that the "formulas" were derived from it, and that "the system" indeed underlies the Waite Smith deck. Let’s look at a couple of examples.

The 10 of Swords, as we can see above, represents the Sun in Gemini. The Sun, normally the most positive of signs is only just arriving in the illustration. We can better understand why from the ten’s Qabala influence. First, though, let’s take the Zodiac sign. Gemini is the story of the twins Castor and Pollux: one was immortal, the other mortal. If we place the illustration at the moment when the mortal brother has died, before Zeus places them together in the heavens as a constellation, we can see the illustration aligns well with the astrological and qabala influences. It is Pollux’s pain at his first sight of Castor’s body. It is the moment of utmost despair. As for the alchemical element, Swords are the suit of air, of action, sometimes conflict. But this is the third decan of Gemini, and the last of the Swords’ minor arcana. The conflict is ending. A new cycle will take place with the rising sun. To Waite and his contemporaries, the qabala emanation of Malkuth represented a result or ending, prior to the beginning of the next cycle. All that we’ve described ties in to Waite’s divinatory meanings "pain, affliction, tears, sadness, desolation." Waite also tacks on the phrase "none of these are permanent" to the reversed meanings. A match for our theory. As a bonus, when we understand the stories that underlie astrology, we can not only better interpret but we can also better communicate a cohesive story out of several cards laid down in a spread. These are stories that have fascinated humankind for millenia.

One more. In the 5 of Pentacles, a destitute couple, dressed in rags, he on crutches, walks past a church in a driving snowstorm. The panes of the stained glass windows are portrayed as coins, lit from within. We are at Mercury in Taurus. Mercury is the quick, changeable messenger-god. We see signs of wealth and poverty side by side, a message about the changeability of fortune. Taurus is also about practicality. Here, clashing with Mercury’s changeability, it is at its lowest. It’s a late winter snow storm The Order of the Golden Dawn called this card the Lord of Material Trouble. Pentacles are the suit of earth, and its wealth. Taurus, the bull of heaven, is the House of Money, because the ox who plowed the Earth was the source of wealth. There is one element of great wealth here: the couple are dedicated to each other, staying together in the worst of times. Geburah, the qabala emanation for the five, was thought by Waite and his contemporaries as perhaps signifying the struggle against an opposing force. Here, the opposing force is as strong as the wind that blows the snow. This is a card of poverty, the changeable wheel of fortune at bottom, but the card’s other side is the togetherness of the couple. There is a bright element to match the bright windows. One can be assured that Mercury’s changeability alters the situation for the better, quickly. Which is a pleasant way of interpreting this card! 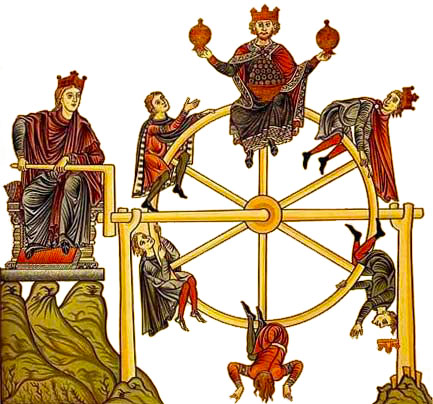 We’ve discussed the minor arcana in particular here. The major arcana are also tied to the Zodiac and planets. But the majors carry a great deal of historical "baggage," and I am wary of over-reliance on any of these influences in interpreting a major. To me, an astrological assignment of any particular major arcanum just means that some tarot theorists looked at the historical meanings for it, and then assigned a sign or planet that fit as best they could. I also see the court cards as influenced more by the classical humors than by astrology.

I have often found that when intuition is missing, a little tarot history, and knowledge of the deck designer’s intention goes a long way in arriving at an interpretation. For those learning tarot, I hope this work benefits you, and good luck!

Copyright Information:The article above and the draft poster are copyright ©2021 by John Iacovelli, All rights reserved.

The content of the downloadable Tarot Wheel by John Iacovelli, for islevue.com is licensed under a Creative Commons Attribution 4.0 International License. Permissions beyond the scope of this license may be available at mailto:admin@islevue.com. 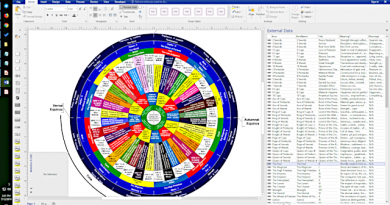 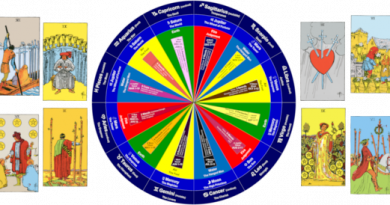 The Wheel and the Mise-en-scène 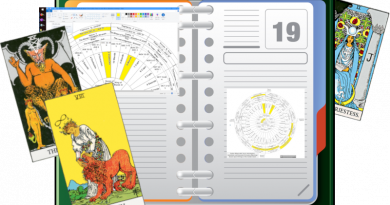 Quick-And-Dirty “When?” Divination With the Wheel