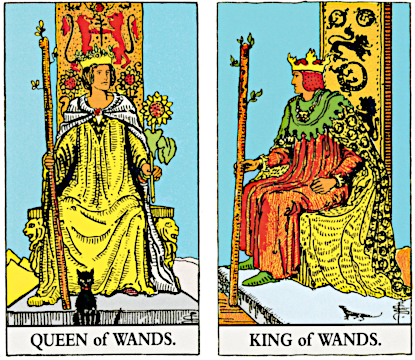 A posting in a tarot forum over at reddit started me thinking about the Queen of Wands. It’s quite an interesting card. Whereas the other queens in the Coleman Smith illustrations seem to be subordinate to their kings, the Queen of Wands appears to wield the power in her family. Place the Queen and King of Wands next to each other. The King of Wands is the only one of the four kings in profile. He appears to look to his queen… as if searching her expression to find out her will before he dares utter a word. Maybe we if we understood the queen’s place in society a little better we could come to a better interpretation of this card when it comes up in a reading.

When we think back to the role of the queen in court in the middle ages, we realize that pretty much all most people know about queenship comes from Hollywood movies. In fact, in conjunction with the rise of feminist studies in recent years, scholarship on queenship has arisen, too. Lois Honeycutt, in her article “Queenship Studies Comes of Age.” (Medieval Feminist Forum: A Journal of Gender and Sexuality 51, no. 2, 2016) describes a consensus view of these studies:

The queen’s role changed over time, and also differed depending on the area of Europe in which she lived. There were few formal or constitutional roles for a queen, so much depended on her individual interests and abilities, her relationship to the king, the financial resources she had at her disposal, and her ability to produce a suitable heir to the throne. In general, the early medieval queen enjoyed physical proximity to the court and the sources of political power, but her status was insecure and much depended on her relationships with her male relatives. By the Carolingian era Christian familial ideals had made her status somewhat more secure, although she usually could be replaced fairly easily if she proved infertile or otherwise unsuitable. The eleventh and early twelfth centuries represent a high point in the queens independent authority and ability to control the power structures in place within her realm. But even after the rise of administrative kingship in the later twelfth and thirteenth centuries, individual queens managed to leave their marks on the political, cultural, and ecclesiastical life of their realms.

We might “popularize” this scholarly consensus as: her role was to bring a dowry to the palace coffers, be subordinate to the king while he was in town (though work as a power or counsel behind the scenes), and run the place when the king went off to kill heathens in the crusades or whatever war took him out of town.

Which brings us to the Queen of Wands (or Sceptres, if you go by the older description). The posting in reddit that I referred to asked “what is that cat doing there?” so let’s take the cat first. The Book T stated “At her side is a couchant leopard on which her hands rest,” They also depicted her as a redhead… who are usually fair skinned. Since they also gave her the esoteric name of “The Queen of the Thrones of Flame,” the red hair makes sense. It may seem a little odd that Colman Smith turned the leopard into a black cat, but it appears from her other work that she liked to draw them. More importantly, it gives the Queen of Wands a dark side. Perhaps it was suggested (though no note to substantiate this appears in the Pictorial Key) by Waite that it would be best to ameliorate the queen’s power by downgrading the feline. After all, there is ample evidence to show he had a number of problems accepting the stronger qualities of the female sex. In any case, the “darkness” is inside her, and the cat or leopard a manifestation of it. I think the two qualities — a woman of fire and darkness — lead to a pretty good idea of the meaning of the card, even today.

Let’s turn to pop culture again. I think we can often clarify the meanings of the symbols of tarot through pop culture, because the writers and artists who made the cards were influenced by their popular cultures. Though I’m a child of the sixties and rock ‘n roll, I do have an appreciation of Frank Sinatra. His song Witchcraft (music by Cy Coleman, lyrics by Carolyn Leigh; one of the incomparable recordings with Nelson Riddle): 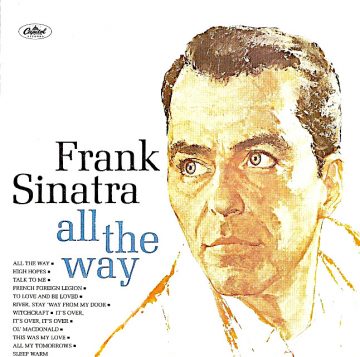 And I’ve got no defense for it
The heat is too intense for it
What good would common sense for it do?

’cause it’s witchcraft, wicked witchcraft
And although I know it’s strictly taboo
When you arouse the need in me
My heart says “Yes, indeed” in me
“Proceed with what you’re leadin’ me to”

’cause it’s witchcraft, that crazy witchcraft
And although I know it’s strictly taboo
When you arouse the need in me
My heart says “Yes, indeed” in me
“Proceed with what you’re leadin’ me to”

I think we found our queen. A woman who through her fiery, yet dark nature, exerts influence. This influence may be unseen, like magnetism or witchcraft. Is the queen actually a witch? I think only in the sense that witches are traditionally seen as outside the patriarchal framework. If you still think the Queen of Wands is a witch, you may wish to visit this page here. There doesn’t seem to be an attribution, so we can’t credit the author.

When it comes up in a reading, somewhere a mature woman exerts her influence… if a job-related question, perhaps a successful business woman (or a rich one) has a strong influence on the decision. If a question related to family, we may ask if there’s a matriarch in the family. If the question is about romance, then the querent may want to think about whether they’ll make a good king of wands.

Some aspects of the Queen of Wands may be quite kindly. After all, her king is said to be a country gentleman (which I think we could understand today as an “old fashioned gentleman.” We should note, though, that Mathers (1888) felt that in the upright position she was avaricious. But he granted her the qualities of “a good a virtuous Woman, but strict and economical” in the reversed position. 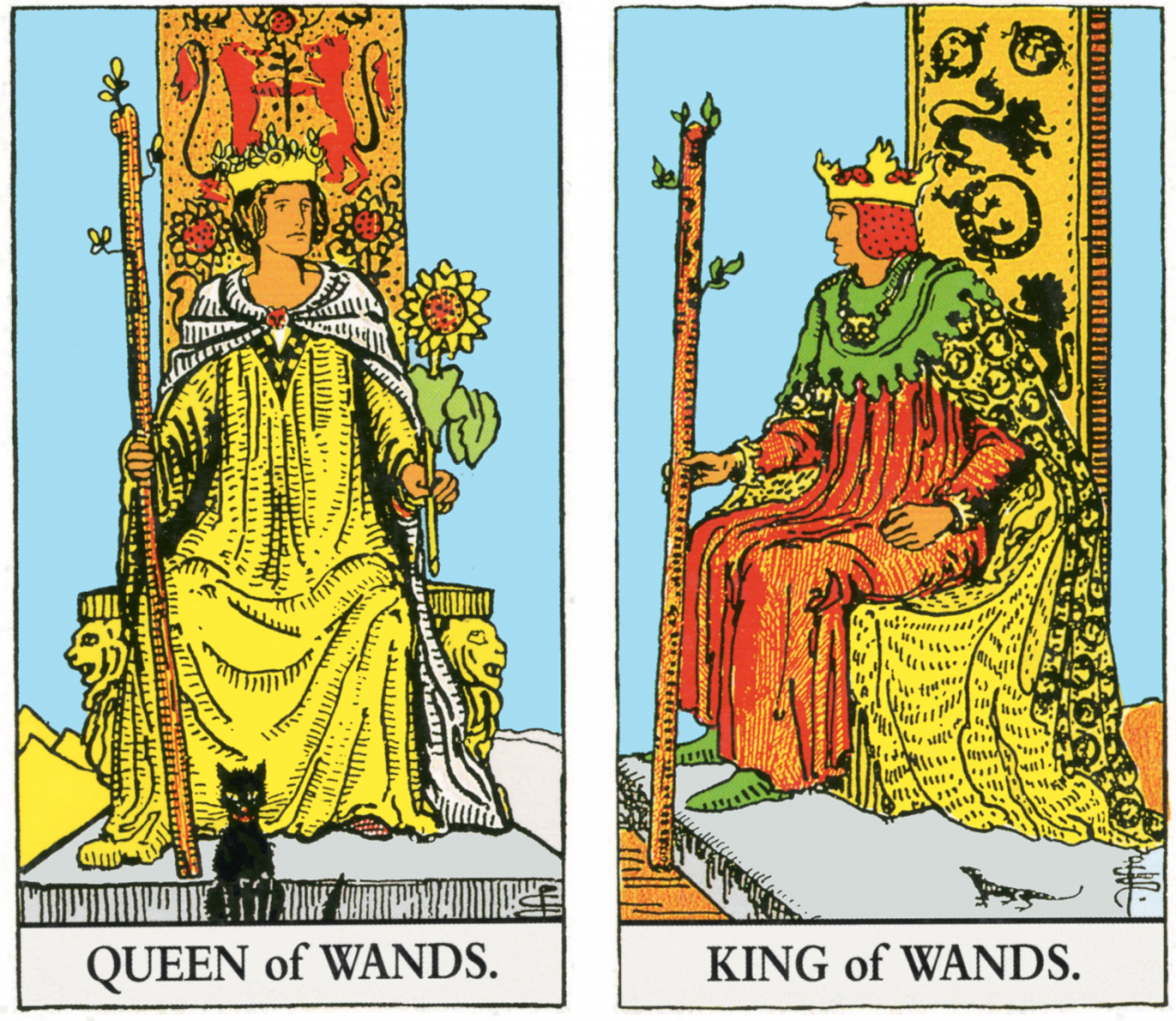 Two more notes. First, I should point out the sunflowers on the queen’s card. It appears to me to be a slight enhancement on the part of Waite and/or Smith. I presume it is a reference to the “fire” side of her nature, since sunflowers voraciously eat up the power from our fiery sun. Certainly, in light of the various Christian and Celtic additions our Brooklyn-born Brit and our London-born American cousin made, it is not a large departure by comparison.

Secondly, I want to point out the salamanders on the king’s card. In folklore of olden times it was said:

“Of all the traits ascribed to salamanders, the ones relating to fire have stood out most prominently. This connection probably originates from a behavior common to many species of salamander: hibernating in and under rotting logs. When wood was brought indoors and put on the fire, the creatures “mysteriously” appeared from the flames. The 16th-century Italian artist Benvenuto Cellini (15001571) famously recalled witnessing just such an appearance as a child in his autobiography.”

Which probably points to a piece of advice that readers might want to have on the tips of their tongues (to give to prospective Kings of Wands) when this card appears. “If you can’t stand the heat, get out of the kitchen.” Although it might also be wise to add that the food tastes best there.

The Wikipedia article copyright is governed by the Creative Commons share-alike license.
Excerpt from Lois Honeycutt’s article © 2016 Lois L. Huneycutt
I am unable to find copyright information on the lyrics to Witchcraft, or on the Capitol Records album art, therefore, all copyrights not specifically noted are acknowledged. 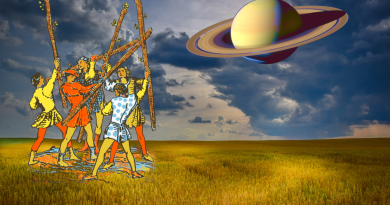 The Five of Wands – A One Page Guide

One thought on “Notes on a Fiery Monarch: the Queen of Wands”