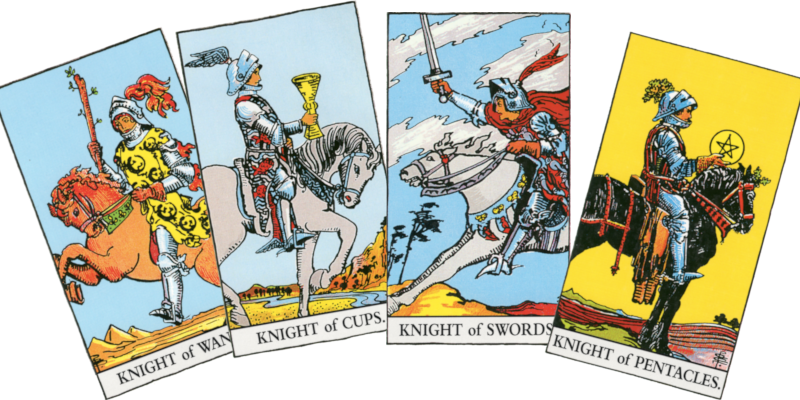 We examine the four Knights of the Waite Colman Smith deck. We look, in particular, at the Book T’s assignment of astrological dates to them, and examine how Colman Smith carries the chronology over to her illustrations. We use the descriptions and order described to place the Knights upon their path in the hero’s quest (a la Joseph Campbell), and attempt to update Waite’s divinatory meanings slightly, to make them a little more specific to modern society.

First, Waite’s excerpts from the Pictorial Key, appearing below the order they follow both in his text, and in the calendar dates assigned by the Golden Dawn:

We first see the Knight of Wands’ horse is rearing, chomping at the bit. Yet the Knight has a worried look as if to say “what am I getting myself into?” For the modern reader, Waite’s divinatory meaning of “departure (as in steam ship departure) or flight” is most appropriate, but the added message may be (with apologies to Game of Thrones) “Winter is coming!” As for the pyramids, they remind us of the Sphinxes. Recall the importance of the Sphinxes in the Chariot (the trimphant Prince who has triumphed in his worldly task) and the Wheel of Fortune (the top of the Wheel). Yet the pyramids are still very distant; the Knight of Wands has only recently departed upon his journey and still has a long way to go… half a turn of the wheel, perhaps. Final note: not appropos of meanings other than the connection to the element of Fire; I love the fiery plume of the Knight of Wands’s helmet! One of Colman Smith’s special touches.

Next, the Knight of Cups sits upon his horse, who appears reluctantly halted, impatiently lifting a foreleg, ready to proceed. The landscape itself seems hospitable enough. Waite, in the text, implies this is the moment of refection before the deed; and that this reflection is a haunted one. His divinatory meaning of “arrival” or “approach” may be added to for modern times with an added note: “last chance to change your mind,” though of course the true knight will not change their mind.

The Knight of Swords charges into the wind. This is the defining moment in which the Hero accomplishes the deed that makes him a hero. The rushing clouds, bent trees, and flowing scarf tie the Knight to the element of Air. Given that the Age of Knights and Chivalry is long gone, it might not be amiss to bring the illustration into these modern, warlike times by portraying a soldier riding a tank. (Perhaps we might even wish to ready an illustration for post-apocalyptic times, and bring in a bit of ironic diversity to boot by recalling the 1990’s Tank Girl, instead!). But returning to our serious discussion of tarot meanings, and referring back to Waite’s divinatory meanings of “skill” and “bravery,” it is important for us to examine how that applies to our society today. What is heroism in our society today? Recent generations have become passive observers, influenced more by television and the Internet than by real life, my generation included. Much of the population in the U.S. feels a general sense of powerlessness, and feels pessismism for the future. In fact heroism has become personalized. People write Facebook posts about “My mom is my hero because she works three jobs,” and so forth. And yes, that is heroic too, and it points us to a modern version of Waite’s divinatory meaning for this card: personal bravery and personal skill. A modernized meaning of the Knight of Swords would be to say that it represents someone at the moment of their greatest accomplishment, personal or societal.

With our final Knight, Waite states that the Knight of Pentacles slowly rides, exhibiting his symbol. He has accomplished his task and is moving on. Notice the plowed fields… he’s passing through civilization, so it’s likely that he’s on the way back home, after his successful quest. Before we look at Waite’s divinatory meanings again, this is a good point to talk briefly of the “meta”-story of the Hero, which Joseph Campbell defined in his works such as The Hero With a Thousand Faces. (If you’ve never read that book, by the way, it probably would be of great interest to anyone who is also interested in Tarot. I’ve read it three times, myself). Campbell analyzed heroic myths of a number of civilizations and societies, and distilled them into a single sort of “plot” structure or “mono-myth” (a term actually first used by James Joyce). Campbell stated the story is such that:

A hero ventures forth from the world of common day into a region of supernatural wonder: fabulous forces are there encountered and a decisive victory is won: the hero comes back from this mysterious adventure with the power to bestow boons on his fellow man.

If we look back to Tarot, an encounter with a Sphinx is an example of an adventure with “fabulous forces.” Campbell also described the help the hero typically receives from allies he meets along the way. This is in much the same way that Tarot may bring the High Priestess, the Moon, or other mystical elements into a story that benefits the querent by way of their counsel. Campbell described talismans or other magical devices the hero might pick up along the journey to aid the quest. Similarly, Tarot might describe devices like the symbolic tools of the Magician which help the querent’s journey. And finally, the hero returns home with his boon; in myth, it could be an elixir of immortality, or it may just be returning as a better king than when he started out. Here we see the Knight of Pentacles returning with his symbol.

That the Knight of Pentacles returns to the court carrying his victory as a symbol provides a view of the court cards as a whole: the Page as the initiate, who trains and prepares for the quest; the Knight (recall that many early Tarots call him the Prince) who journeys upon the quest and returns as the hero, and the Queen and King, who reign and bestow the hero’s bounty upon their kingdom. Our Knight of Pentacles, can thus be said in a more modern divinatory sense to represent “societal utility, serviceableness to others, and most importantly in our self-centered and greedy times, what we would now call self dis-interest.” It is the reverse of what many of today’s societal heroes represent.

In conclusion, the Knight (all four of them taken as a whole) is the hero at the moment of the victory over fabulous forces. Colman Smith has taken a cue from the astrological calendar and created a series of pictures as if they were frozen stills from a single film. The set of Knights are, I think, outside the major arcana, the best “whole” result of the Waite Colman Smith cooperative effort.

Final note: I’m also placing images of the Knights of the Lo Scarabeo deck here as well. Besides being beautiful, as all the cards in that deck are, they do a terribly interesting thing: instead of horses, the mounts are the four beasts of the Revelation (lion, man, ox and eagle) though the “man” has morphed into a sea monster (on grounds of poetic license, I expect!). I think it is inspired lunacy! Recall, too, that the beast has four faces! The comparison maintains the link to the zodiac’s seasons only more or less, but use of the beasts underlines the magical nature of the Knight’s “quest.” Notice also that only one of the Lo Scarabeo Knights wears armor. This fresh, other-worldliness quality in my opinion, eclipses the somewhat stultifying effect that Waite’s “Celt-ized” imagery of Knights errant may bring. In the end, I’m not sure whether the images deliver the meanings any better than Colman Smith’s do, but the effort is thoroughly appreciated and most enjoyable.

Thank you to Wheelie‘s excellent thread in the Cartomancy forum for suggesting the Knight of Swords as a topic. Note that you’ll find comparisons with a few other decks, such as Deviant Moon and Bohemian Gothic in the thread there as well.

Joseph Campbell’s quote from The Hero With a Thousand Faces ©1949 Bollingen Foundation.