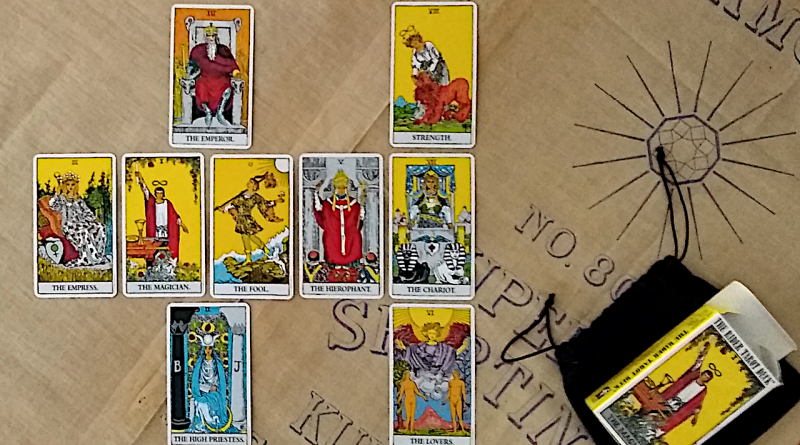 With this post we will pause for a summary overview of the first group of major arcana, since we’ve now done ten.

First of all, by now it should be apparent that my “read” of Waite’s reinterpretation of the symbols of tarot skews heavily towards “Christian” concepts and homilies. To a lesser degree, and not in a contradictory way, we will see in other illustrations a skew towards “Celt”-ization (after all, Waite put the “Celtic” in “Celtic Cross.” Not bad for a Brit born in Brooklyn!). Juliette Wood has a comprehensive monograph available on the web that might be enlightening.

The other takeaway is that Waite puts additional meanings in previously used symbols. Sometimes, the additional meanings could only be known from his texts. But in other cases, they’re overt. In programming, we call this cramming of additional functionality into something that performs a related function overloading. Waite takes the very basic archetypes of the rennaissance cards, the kings, queens, marriage, pope, abbess, etc., and adds new symbolic meanings. In doing so, he shows his genius, and the genius of the Golden Dawn which overloaded those earlier cards with meanings drawn not from Christianity, but from the Qabal and numerology, which is where Waite differed from them.