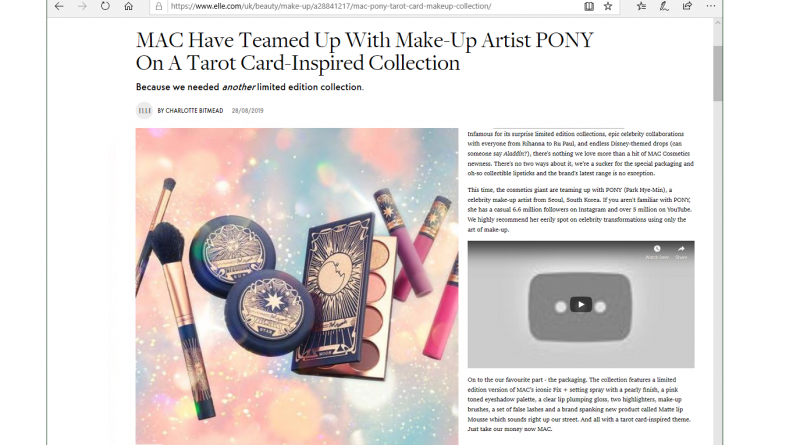 I was pleasantly surprised to see Elle magazine reporting today on a new collection of high end cosmetics being marketed with packaging that evokes tarot cards. MAC Cosmetics, as per WIkipedia, is “one of the top three global makeup brands, with an annual turnover of over $1 billion, and 500 independent stores, with over thirty stores in France.” It’s an Estee Lauder company. They commissioned South Korean artist Park Hye-Min (PONY) to create packaging using the Sun, Moon and Star cards for the new line.

This is hardly a surprise. It is clear that tarot is both trendy and popular. Market research that estimates the size of the tarot market, which in our hyper-materialistic society would be the surest measure of tarot’s popularity, is difficult to come by. That such research has been done should probably be proof enough that tarot has achieved some level of popularity and economic success. (There appears to have been one, possibly two such reports, in 201i and possibly 2019, available for purchase from several sites. Do a web search for “The global market size of Tarot Cards is $XX million in 2017 with XX CAGR from 2013 to 2017, and it is expected to reach $XX million by the end” enclosed by quotes if you wish to explore).

It has long been my suspicion that the popularity of tarot climbs in uncertain times. Look at Waite’s deck, which debuted in the United Kingdom in 1910. The British empire, on the eve of the first World War, showed the first signs of its cracks before its fall. The United States was rising as an economic power, and Gandhi had just began the Satyagraha movement four years earlier. The next popularity wave could be said to be the 1930’s depression-era United States. Paul Foster Case was at the height of his popularity, and tarot was discussed and distributed in “ladies magazines” about which Marcus Katz has written. This link leads to a McCall’s Magazine photo depicting a tarot reading. Moving onto the Late 1960’s, that tumultuous decade, with the Civil Rights movement, the Vietnam war and arguably the greatest flourishing of arts and letters worldwide since the renaissance also saw a bump in tarot’s popularity. That we now see tarot flooding Instagram and Pinterest, and commercial products glomming onto its popularity for distinctive packaging ideas shouldn’t be a surprise. Is it an indication of tumultuous times? The U.S. economy has been surpassed in the measurement of aggregate purchasing power by China, not unlike the British Empire being overtaken by the U.S. in Waite’s times. U.S. inequality of income is pushing huge swathes of the population into economic peril not seen since the great depression. Though commercial media has a chokehold on new art, I suspect that if we survive the next few decades, historians and critics will point to a wealth of digitally based artists and authors of this time as a mini-renaissance. Maybe even some of the KPOP creatives, like PONY. Perhaps part of tarot’s popularity is a search for answers in tumultuous times. If Tarot’s popularity continues to rise, no doubt some of those critics will be holding up some tarot decks as proof of the vibrancy of art in these strange and stressful times.