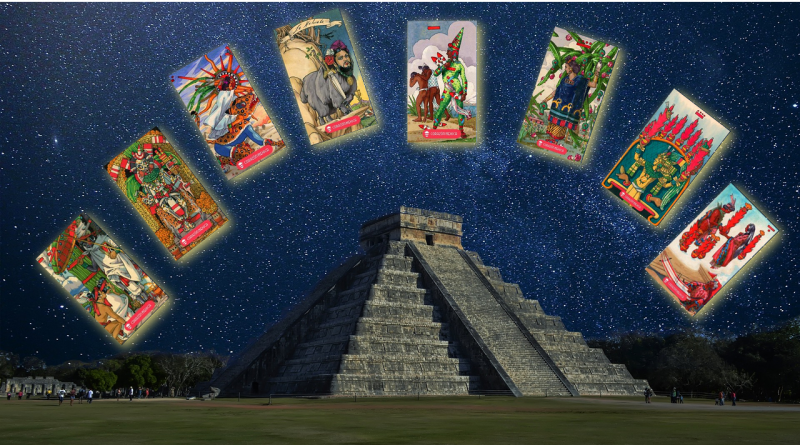 Mexica Tarot is a tarot project (paintings, not a deck) to be found at Etsy, by Chicome Itzquintli Amatlapalli, an artist in Mexico who is dedicated to the painting and craft of Mexica and Pre-Hispanic spirituality.

The paintings hold an extraordinary vibrancy and storytelling ability, but what my caught my eye, besides their beauty, was the excellent documentation of the artist’s thoughts as to how the images pertain to tarot, and how successfully the artist managed both the modernization and historical adaptations. Consider the description of the Five of Flints (swords) below. We can recognize immediately that the card’s concept is very much like the Waite Colman Smith execution—even while converting that concept to the artist’s own.

There are fully thirty five Tarot “stories” thus far, a mix of major arcana and minors (flints, hearts, staffs and Jade). A number of Aztec gods and legendary figures appear. Where one might think it a “stretch” to adapt a Mexican story to a tarot image, such as the Hanged Man, the artist does a credible job of relating story to story. In the case of the Hanged Man, a character named Tlacapiloa transforms himself through his own sacrifice into the Sun.

Very fine work indeed; a completed project would make as fine a book as it would a tarot deck. At the moment, reproductions of the paintings are available in a variety of sizes, and in some cases, original works are also available.

A young man looks back at his conquered enemies, dressed in the Huastec uniform of an established warrior. His opponents weep and wander away, disconsolate. On the floor at their feet are two flints, and the warrior holds three more, which he has obviously taken from them. His costume is made of tiny precious quetzal feathers sewn to a thin cloth; a costly fabric which reflects his high status and great wealth. However, his regalia is also embroidered with crosses, symbolic of terror and distress. They are the crossroads, which in Mesoamerica represents misfortune, for at the crossroads the future is unknown, and is likely to be dark. At the crossroads dark spirits descend, such as the Tzitimime, the star demons, such as the one embroidered on his hat, who bring misfortune upon the innocent and undeserving. This card represents failure, degradation, defeat, and victory by unfair means. The warrior is ambitious, cruel, and deceitful. He seeks victory at any cost, without realising that the reward might not be worth the price. He seeks the fulfilment of his own ambition without regard to the cost to others. The defeated men faced an opponent who fought unfairly and ruthlessly. The Five of Flints warns of struggles greater than anticipated, of the knife in the back, the unfaithful lover, the opponent who, through unfair means, will do anything necessary to succeed.